How To Edit Waterfall Photos? The majority of waterfall photos are simple to edit. Bear in mind that when photographing waterfalls, you should pay extra attention to your camera’s brightness.

Generally, the average landscapes have a lot of contrast. Darkened areas and dark rocks are common because of bright (nearly white) water streams and waterspouts. Therefore, you should know how to edit waterfall photos skillfully to fix those issues.

Additionally, the patches of bright spots from penetration sunlight can easily appear in your image if there are gaps in the tree shade above it. The detail is lost when the blacks and whites are trimmed due to indecent exposure. It’s a smart idea to bracket your exposure here. By contrast, if you want to enhance the color and tone of your waterfall photos, you must hire an experienced Photo Color Correction Service to get your desired outcomes.

This blog post will broadly describe how to edit waterfall photos appropriately. In general, I’ve used a similar editing procedure for most of my woodlands waterfall images. Here, start reading from now! Learning is Fun!

Learn How To Edit Waterfall Photos In A Few Simple Steps:

Anyone can be fascinated by waterfall photos. They can effortlessly appeal to everyone. The roaring instability in the water stream and the booming smash between the water and the rocks have a dramatic quality.

However, the final image will express significantly different emotions depending on whether I capture the movement of the water in my photoshoots or let it flow. For editing your raw waterfall pics, you need to follow the below steps carefully:

Step#1: In Adobe Lightroom, I had first merged the three bracketed pictures. Keep holding Ctrl while clicking the three photos to pick out all three. Then, using the right-click menu, select photo Merge –> HDR. I marked auto-align and chose none for de-ghosting in the pop-up box.

Then, a new file will be generated when the photo has been combined. Go to the “develop module” and choose that file. 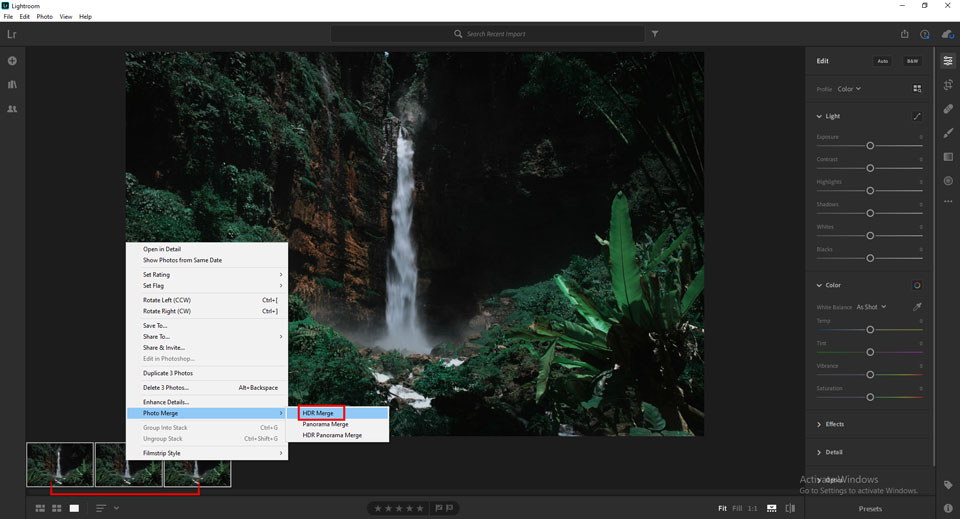 Step#2: Secondly, go to the “lens corrections tab.” After that, check out the “remove chromatic aberration” and allow the “profile correction boxes.”

Since I know, I’ll trim it, and I shot it from a wider perspective to ensure that I don’t miss any important details while cropping. I normally use a 5:7 aspect ratio.

Cropped the photo with a 5×7 aspect ratio

Step#4: The next stage is to adjust the combination of whites and blacks. Therefore, I raised the “Whites” to around +17 while lowering the “Blacks” to around -18. As a result of this task, the image becomes more contracting. Hold down the “Alt key” when modifying these or other brightness adjustments (such a s-highlights, exposure, shadows).

However, it’ll show any cropping in the blacks or whites in the photo. So, have a quick stare at the 2nd image below. A spot will show whenever a clipping happens. 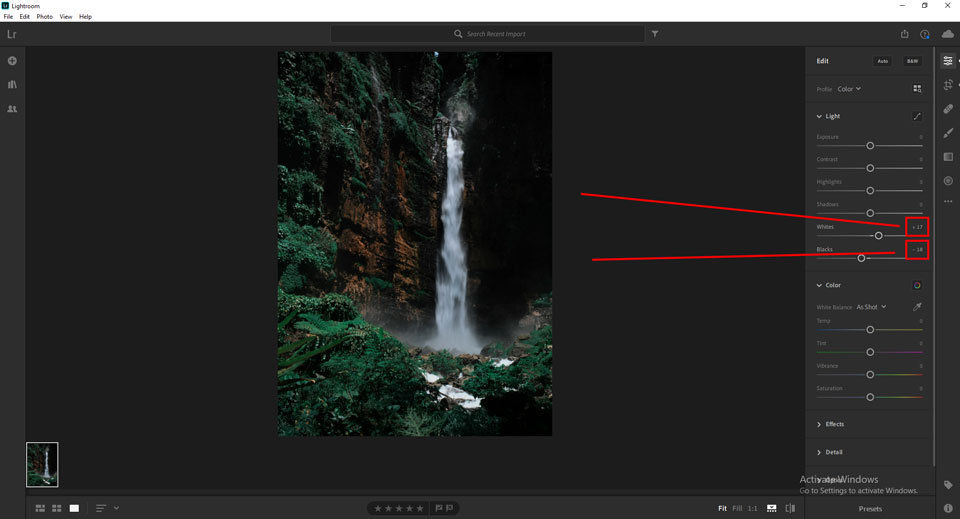 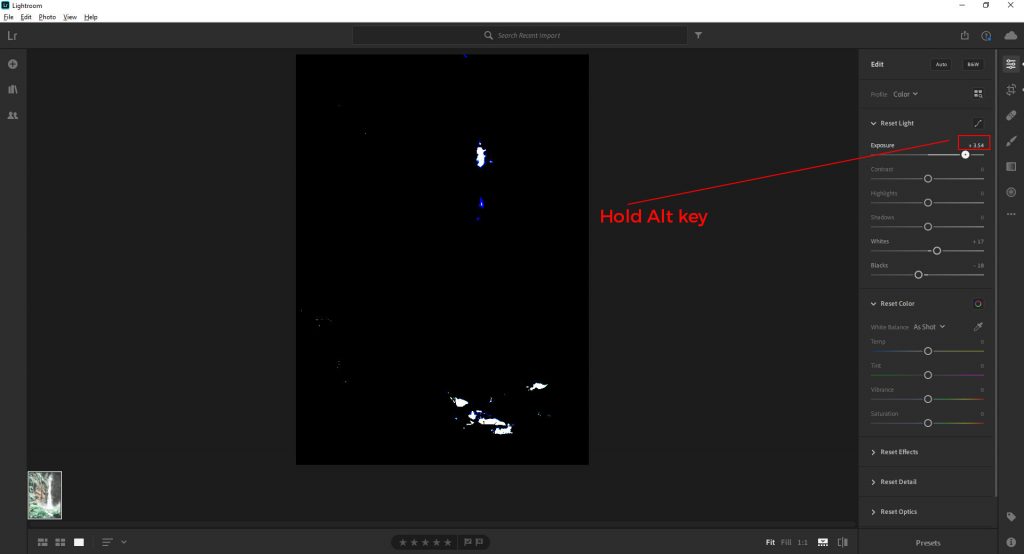 Step#5: After that, I increased my “Exposure” to +1.00. In the histogram (The Right Side of this Curved), you can easily see clipping in the whites. In my following step, I’ll pay more attention to this thing. 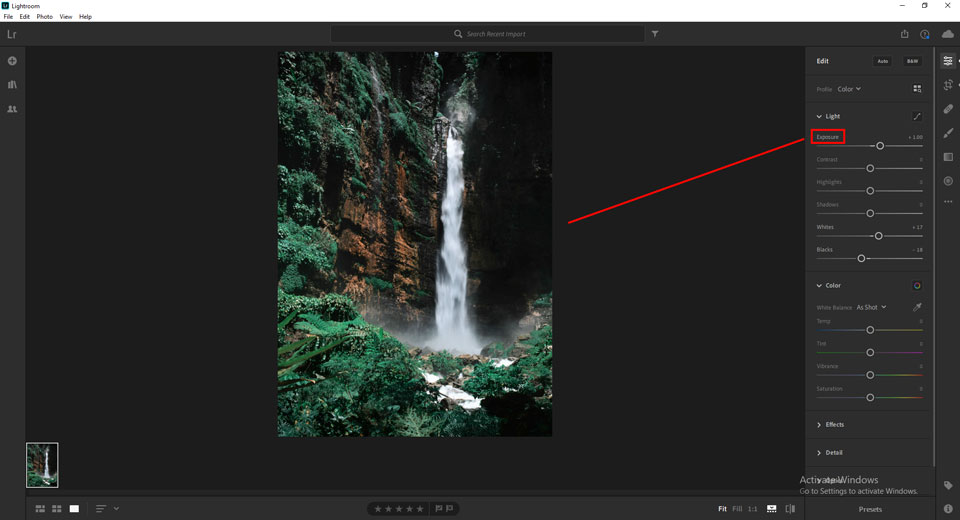 Increased the exposure to brighten the image

Step#6: To emphasize the sensitivities in the water streams, I lowered the “Highlights” to -82. The white clipping was also removed as a result of this. I’d re-adjust the “Whites,” but it’s not necessary in this case. To bring up the ins and outs in the rocks, I boosted the “Shadows” to +35. 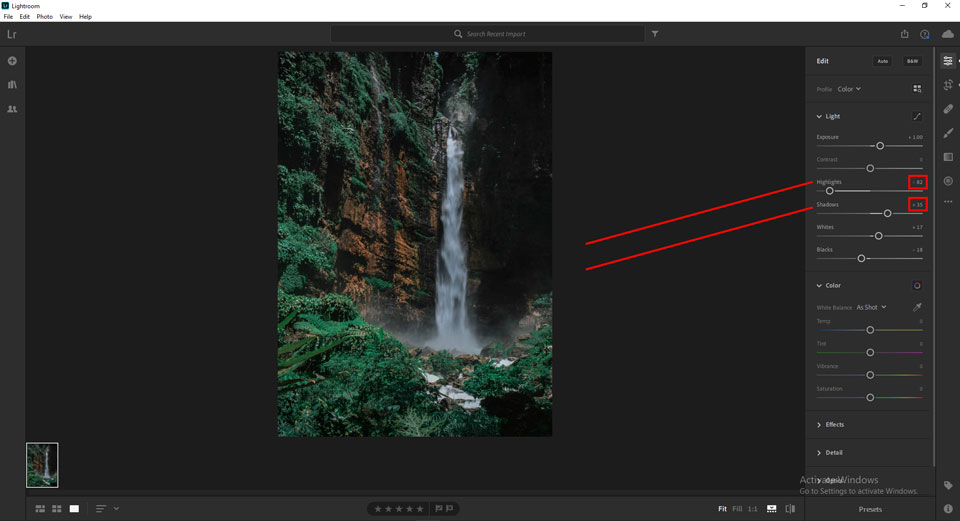 Reduced the Highlights and increased the Shadows to recover detail

Step#7: After that, I adjusted the “White Balance (WB).” I sometimes modify the WB first, depending on the shot. In this case, I want to lighten it first to make a better decision effortlessly. Moreover, the WB of this photo does not require much adjustment. As I thought the landscape was too green, I only raised the color (Tint) slightly (towards magenta, away from green). Adjusted the White Balance by just a bit

Step#8: After satisfying the exposure, I worked on both the contrast and details. Then, I wanted to contrast this image slightly, so I raised it to +9. I decreased it to -18 for clarity and to make the photo appear softer. Therefore, the softer-looking leaves blend in well with the water’s gentle flow. The “Dehaze” is also reduced to -12. It gives the image a gentler feel once more. 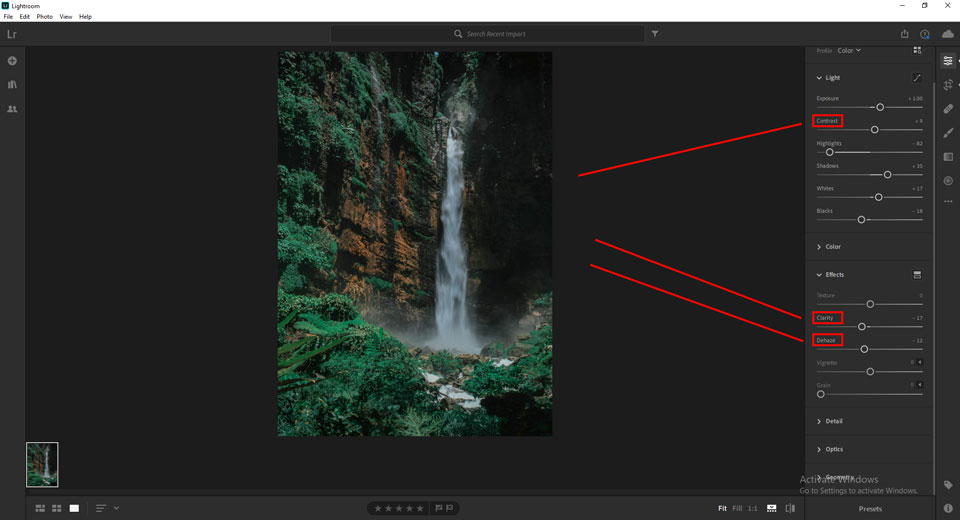 Manipulated the Contrast, Clarity, and Dehaze to soften the image a little

Step#9: In this step, I’d like to make slight changes to the tints (Colors). I don’t want to overuse the color because the image is already vibrant. The “Vibrance” was increased to +13. The “Saturation” was decreased to -6.

In the HSL (Hue-Saturation-Lightness) panel, I modified the specific colors. To create the rocks, mountain, and water pop more, I boosted up the “Saturation” of Oranges, Aquas, and Blues (+6, +12, +11). To soften the color (tint) of the trees, I lowered the yellows (-7) a little. I just made a smidgeon of a change to the brightness.

On the other hand, I raised the Oranges (+6) and Yellows (+5) while decreasing the Aquas (-3) and Blues (-6). It improved the brightness of the wooded picture while also intensifying the hue of the water. 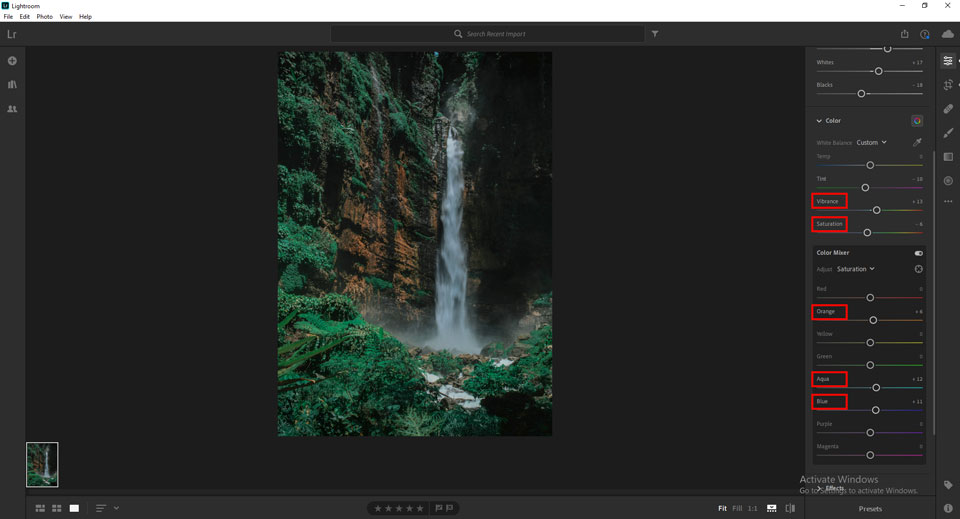 Adjusted the Vibrance and Saturation 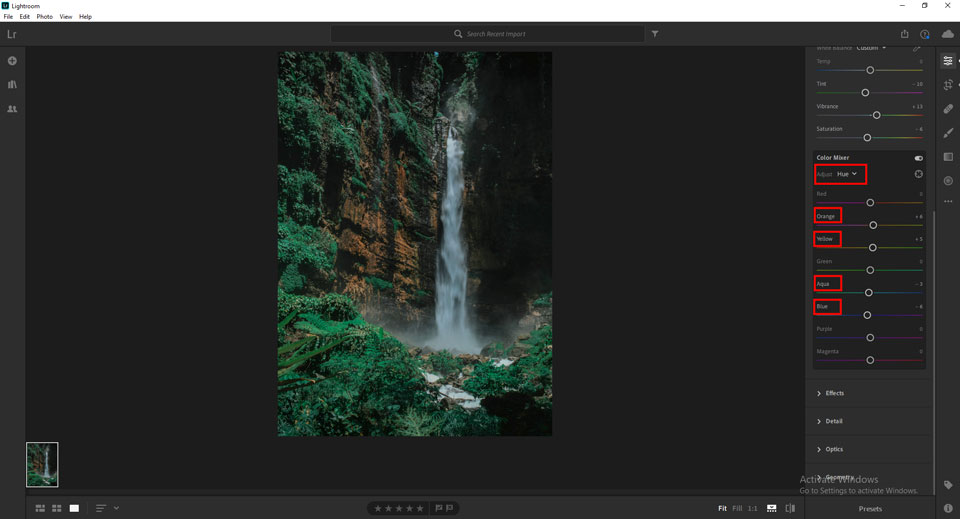 Step#10: The “Tone Curve” is a really useful tool in your Adobe Lightroom menu. I slightly elevated the “Midtones” and “Highlights.” 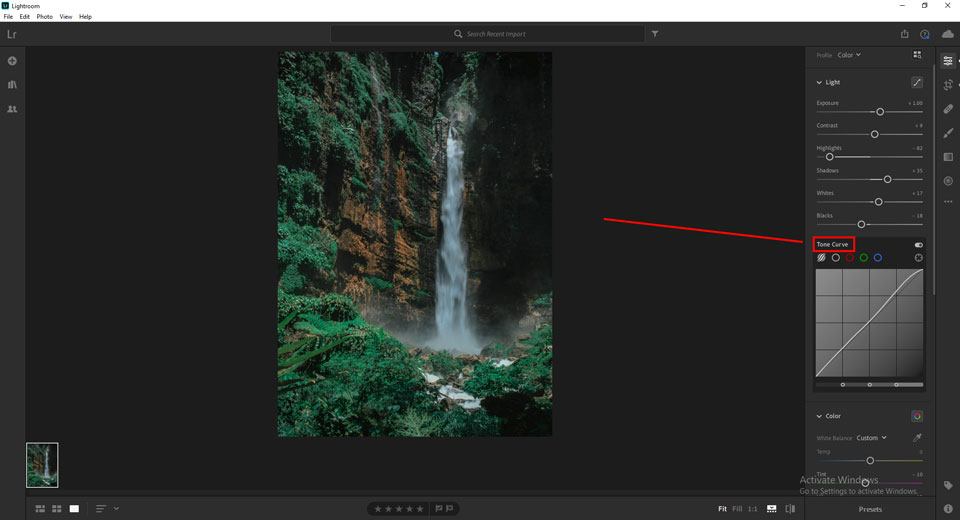 Increased the mid-tones and highlights in the Tone Curve

Step#11: Finally, change the hue profile in Adobe Lightroom from “Adobe Color” to “Adobe Landscape.” It added a little more vibrancy to the photo. The profile option is a drop-down menu above the WB (White Balance) sliders. I assume that most people like to do this at the start of their editing procedure. But I only remembered to fix it now. So there you have it. Step#12: I’ve already made many changes to this photo up to now, and it’s ready to go. However, I’d like to add a subtle effect to it. The overall process was taught to me by a few professional snappers that I viewed on YouTube. Hence, the “Orton Effect” is the name of this approach. Opened the photo in Photoshop

Step#13: In this step, I need to go “filter” —> “blur” —> “gaussian blur” on the copied layer, which must be on top of the original. The vision turns hazy almost instantly. Choose a “Radius Size” so that the photo is blurred, but still, you can see the details, as shown in the photo below. I went with a radius of 30 Pixels. 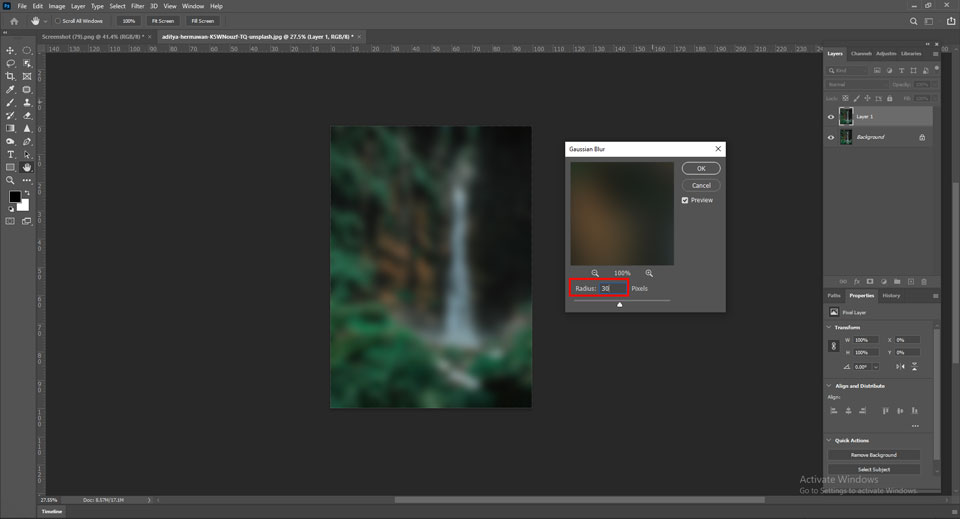 Chose the radius size of 30 pixels on the Gaussian Blur

Step#14: In this stage, select photo —> adjustments —> levels on the same layer. Moreover, crunch the blacks and whites together in the pop-up box. I started with the “Black” at 0 and increased it to 18. The “White” was originally 255, but I reduced it to 180. As you can see in the second image below, I ended up with a terrible and highly contrasted photo. 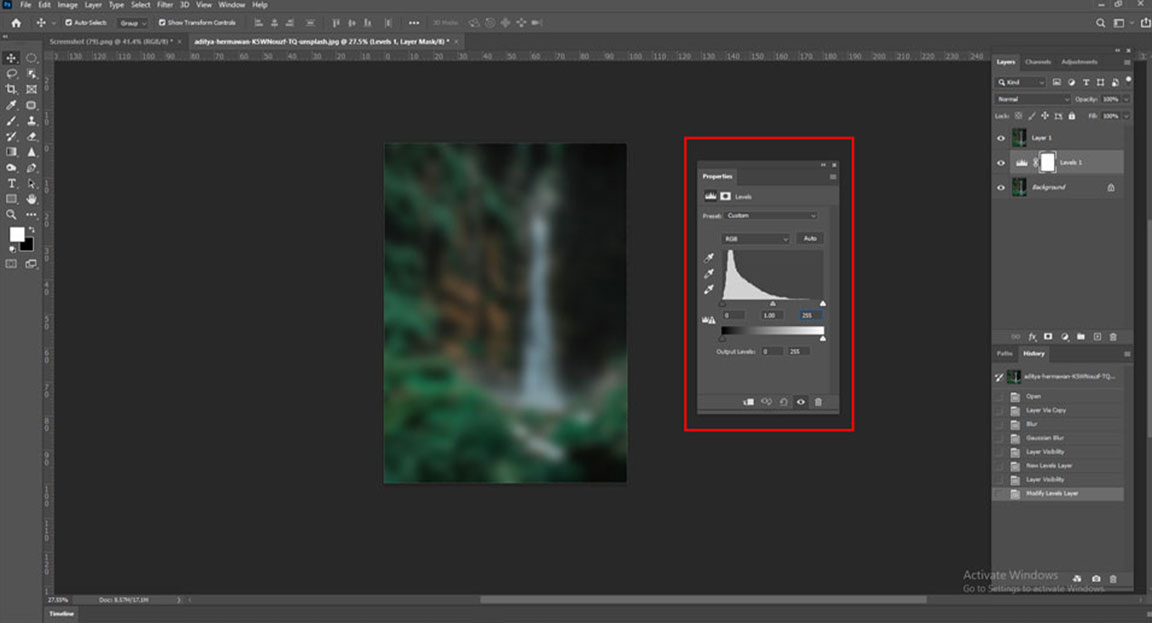 Opened up the Level adjustment Crunched the Whites down and the Blacks up

Step#15: In the final stage, decrease the opacity of that awful layer to 0. There is an opacity adjustment on the right-hand side, above the list of layers. Gradually increase the opacity until the image appears softer while still retaining details. However, the top photo is at 100% opacity, shown below. A terrifying waterfall pics!!

In a word, the “Orton Effect” can transform any photo into a dreamy experience. The waterfall engagement photos appear to be softer, sunnier, and ethereal. Anyone can consider a scenario from a fantasy movie that resembles a fairytale!! Adjust the opacity of the top layer RAW file straight out of the camera

Eventually, you have owned it. That’s how I went about editing my waterfall images. Therefore, the waterfall’s before and after photos are shown below. In the end, this mini-tutorial was intended to teach you something. If you like it, I’ll possibly do it again soon. Thanks for reading this long post!!

Know Top 7 categories of waterfalls before watching how to edit waterfall photos:

1#. Pick out your natural waterfall photos to work with.

2#. Create a copy of the selection and paste it into a different layer.

6#. Fill out the water stream with blur efficiently.

8#. Complete the final polish process on your waterfall image.

In a nutshell, I only want to emphasize that everything here is arbitrary. It can be perfect for you if you enjoy waterfall photographs with little to no details in the water’s movement.

Additionally, you can obtain the best of both offline and online worlds by employing all the approaches that I’ve already explained in this long article and by deciding which combinations of options can perform better for your photos in post-production. It’s wiser to have more than you require than regret not capturing a wide range of waterfall photographs.

Here, I can recommend experimenting with different shutter speeds to find out the style that suits you best. I believe this info will support you in enhancing your entire waterfall photos. Plus, if you have any queries regarding how to edit waterfall photos quickly and efficiently, feel free to leave your comment below.

What you can read next Why Do You Need Image Manipulation For Your Ecommerce Business?

Get A Quote Now >